The Great Eastern Hotel- "the jewel of the East"

The famous Sepoy Mutiny was still sixteen years to go.
Bahadur Shah Jafar was still the emperor of Mughal Dynasty.
The East India Company was very much on their way to rule India, the vast country.

It was only at this segment of time the great hotel was established in 14th November 1840 by David Wilson at the 1-3 Old Court House Street close to the Tank Square in Calcutta. Initially it was named as Auckland Hotel but was just popular as locals were calling it as 'Wilson's Hotel'. 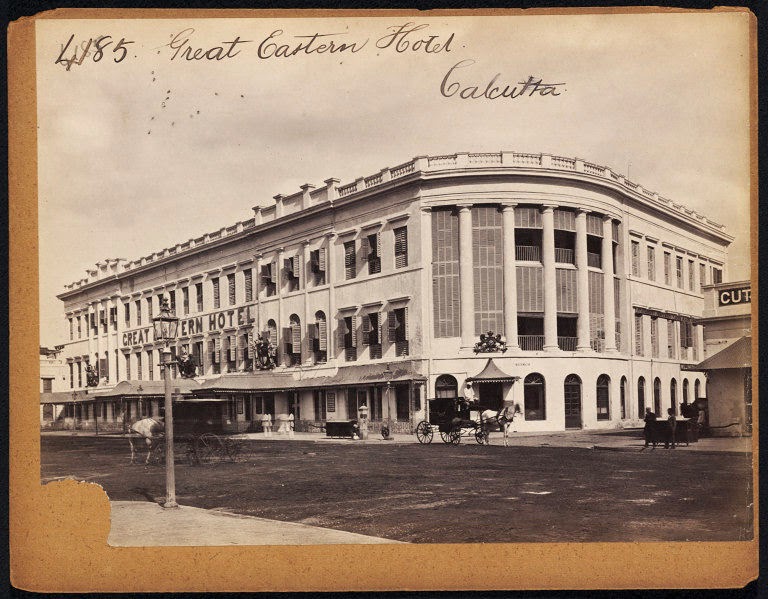 The above photograph was captured between 1850- 1870 & is preserved in Victoria & Alburt Museum.

The road in front of the hotel is the Old Court House Street. The Dalhousie Square was known as Tank Square in those days & it was the central business district of the city. A good quality hotel nearer to the Writer's Building, Government House was much needed to accommodate the officials, businessman etc. 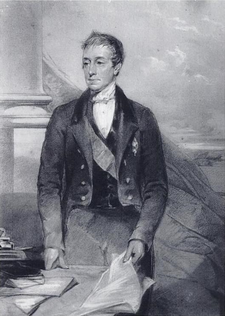 The hotel was named after George Eden, the 1st Earl of Auckland who was the Governor General of India (1836- 1842). Actually David Wilson was a confectioner by profession and had a bakery at the site of the hotel at first. Later on, after opening the Hotel, the bakery was included and became an integral part of it. The breads and cakes of Great Eastern hotel won the taste buds of Calcutta and continued to do so for more than a century. 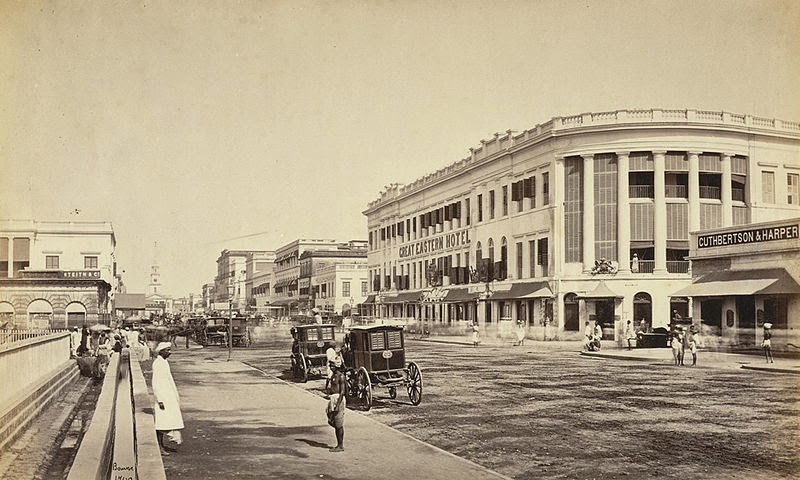 The above photograph was captured by Samuel Bourn in 1865

From the above photograph it is clear that by 1865, the building was already known as The Great Eastern Hotel & not as Auckland Hotel. Initially, it was opened with one hundred rooms.
In the 1860's, the company was renamed. Earlier it was D Wilson & Co and it became Great Eastern Hotel Wine & General Purveying Co.
In those days, people used to come directly from port. In those days, The Great Eastern Ship was very famous as they used to have regular voyage from England to Calcutta. David Wilson was not an ordinary businessman but a visualizer. He felt that an identical name with the ship could be a success story for a new hotel. An unique marketing strategy! He did not have an MBA degree from any prestigious institution.
In those days, the hotel put advertisements in popular newspaper like Englishman.

History says., Mark Twain the great American author stayed in this hotel for a few days. It was a not pleasant experience for him as it was raining and the author was suffering from asthma.
Apart from that, Mahatma Gandhi,Queen Elizabeth, Nikita Krusuchav ( the Russian premier ) stayed here.

King of Coachbehar, King of Burdwan, King of Travankore had their special suits here booked throughout the year. Special attendants of these prestigious guests were appointed in the hotel round the year. They used to were special uniforms with King's emblem on their coats. It was a popular destination in Calcutta for the tourists and businessman and also to the dignitaries as well.